By jhulud,
July 6 in Vinyl Collective Message Board 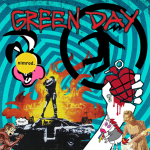 Sucks for the flipper who is going to receive the 1 copy you ordered.

Me too. But after the shitshow that was the signed Manic ones...I'm doubtful.