By meatrocket8,
September 2, 2021 in Vinyl Collective Message Board

Unoriginal Vinyl just posted the below on their IG story... I'd say everything is gonna be alright 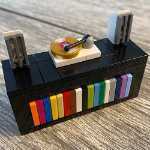 On today's Tooth & Nail Labeled Podcast Brandon Ebel confirmed that there will be different color variants for the three Solid State releases for sale online in the near future.