By travis,
July 18, 2012 in Vinyl Collective Message Board

It'll probably just a be a collection of door mats and baby onesies with this image on it. Watch. 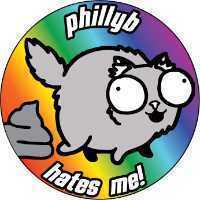 As someone with Instagram, I appreciate the info being posted here so I can view questions and comments about the record without leaving the site; it’s more than common courtesy, it’s common sense

It’s all good, glad to hear that.  For next time though, just think about how much time and energy you put into being a facetious lil’ bitch, and imagine what it could accomplish with content that’s a