By faith,
June 30, 2007 in Vinyl Collective Message Board 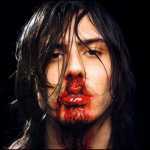 Im getting the hang of this now. I think.

Get out of here with that shit, Rudy.